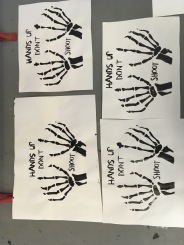 Working from the photographic inspiration of the photo, I decided to portray a pair of skeletal hands rather than normal hands with their hands up. I felt that as a stencil the skeleton would be more poignant representation of the cause, with the skeleton being something which could represent not only death, but the core of human kind as at the core we are all the same inside.

I also chose to add the slogan “Hands Up Don’t Shoot”, a popular chant at rallies against police brutality to make the statement of the stencil print more clear.